In this comprehensive article, we have collected the most important growth and revenue milestones, the introduction of new features, and other important details in the history of one of the most popular and definitely most influential dating company, Tinder. This is the History of Tinder year by year from 2012 until today.

The founding of Tinder in 2012

The history of Tinder has been started in a startup incubator and defined the later history of the successful dating company.

2015 was an important year in Tinder history as they started to make money In 2015 the growth of Tinder started to stabilize but it was still growing its userbase in a very rapid way. In 2015 they obviously started to focus on the monetization of this huge userbase and very attractive demographic groups. (people in their 20s and 30s) in 2015 the company also made its first acquisition in Tinder history by acquiring the photo messaging app startup, Tappy.

As Tinder started to monetize the app in 2015 (a very important milestone in Tinder history) and started to make a lot of money they had more resourced to add new free and paid features to the app in 2016. A  second acquisition by acquiring a San Francisco based startup, Humin a startup focusing on contact management feature. Tinder Revenue kept skyrocketing in 2017 as the number of paying premium subscribers doubled in a year reaching 3.1 million at the end of Q4 2017. 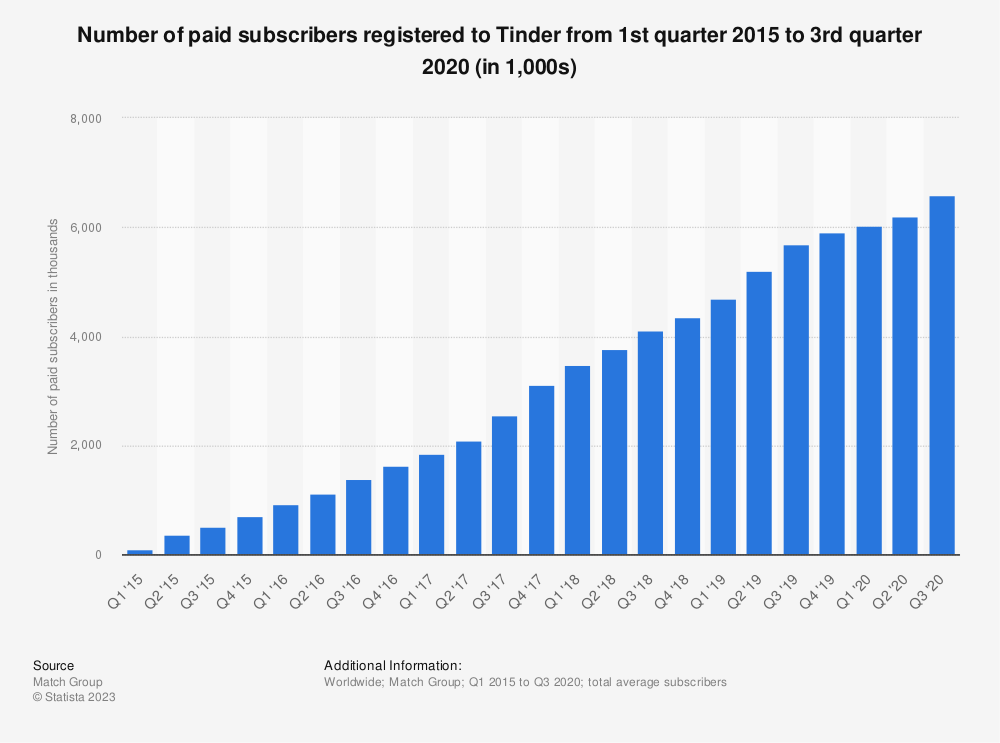 In 2017 Tinder acquired another company for an undisclosed amount called Wheel. Wheel was an L.A. based startup whose app let users share collaborative, video-based “stories”. This was a clear move from Tinder to add a video feature to the app.

In 2019 they reached the following milestone: more than 30 billion matches were made in the app. In terms of financial growth their revenue and the number of premium subscribers also kept growing. It had a net revenue of 1 152 million dollars and its premium subscriber count reached 5.9 million by the end of 2019.

If Tinder was a separate company its 2019 valuation would have been around 10 billion USD.

The COVID 19 pandemic and the stay-at-home orders and lockdowns it triggered also had a significant impact on Tinder. The usage of the app surged, just on 29 March, 2020 more than three billion swipes were recorded on Tinder. At the same time as more people experienced uncertain situation in the job market, the the growth in the number of premium subscribers has declined.