In this comprehensive collection we will curate the most up-to-date statistics about the online dating app, Bumble. Some of these Bumble statistics come from Bumble’s official press releases or reporting, some are based on industry research papers, few of them are estimated based on different research methodologies.

We will focus on worldwide statistics and on the US, as the US is the country with the highest number of Bumble users worldwide.

If you know that some of the statistics we display here are not the latest one, let us know in the comment section and will update the statistics accordingly.

As Bumble is not a public company yet, they are not required to release user numbers or exact revenue statistics. There are numerous stats that are floating around.

A 2020 report says there were a total 87 million people who use Bumble worldwide but there is no official confirmation for this, another one from 2019 puts the number around 66 million users.

The active users are situated in 150 countries.

Number of Active Users in the US

Number of People who used Bumble at least once

The 5 million active Bumble users stats mean that out of the 210 million adult Americans, around 2% has an active account on Bumble which is a nice figure.

However, another interesting number is how many Americans have downloaded and used the app at least once. There has been a survey made in April 2020 that estimated this number to be around 8% of the US adult population which is around 20 million people.

Although this number will probably never be confirmed by Bumble and there is no way to independently confirm its validity but it shows how significant effect Bumble had on millions of Americans’ lives.

Bumble that is most often is referred to as the Feminist Tinder is famous for its most favorable gender ratio in the online dating industry. In 2019, based on an App Ape statistics, reported by Statista.com, 34.5% of users were female and 65.5% users were male on Bumble.

This ratio shows how online dating is dominated by men when on one of the most popular dating apps only one third of the active users are women.

Bumble’s Gender ratio in the US

The US shows similar distribution of users by gender ratio, according to a survey conducted in 2020, presented by Statista, 10% of the adult male population have used Bumble compared to only 6% of the female population which means that around 60-70 percent of the Bumble users in the US are male. 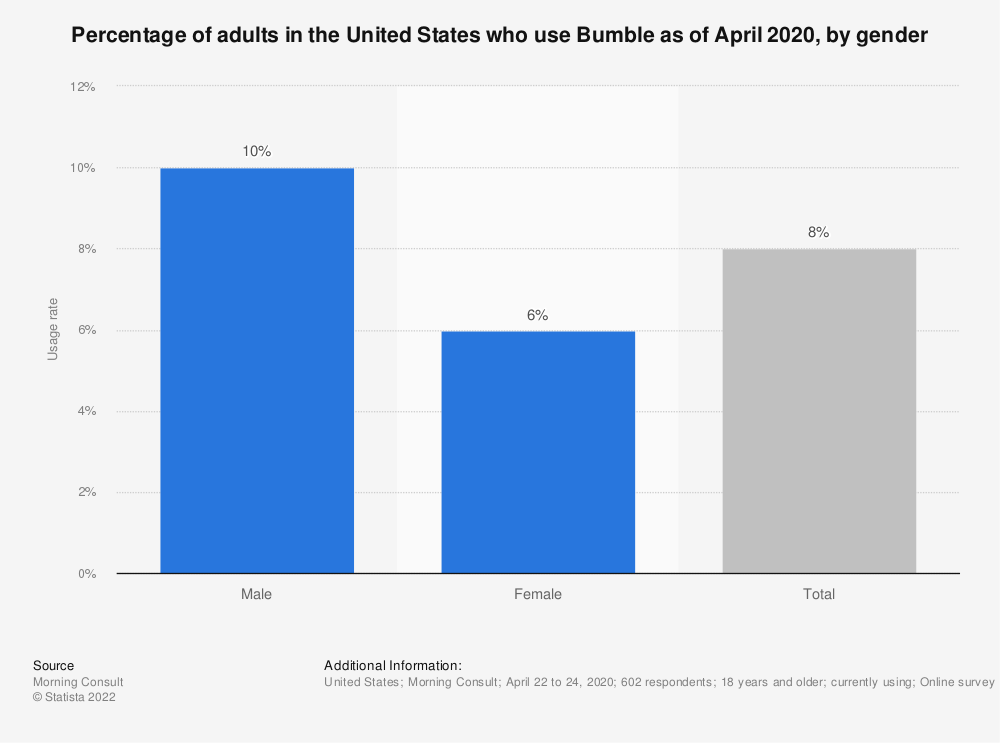 Unfortunately, Bumble does not report any official age demographic data that we could display here. To get a better idea about the average age and the distribution of Bumble users by age, there have been multiple surveys conducted over the years.

According to one of the most cited SurveyMonkey survey, Bumble has the youngest demographics out of all popular online dating apps. The study reported that more than 63% of Bumble users are younger than 30 years old. An important caveat that this study was conducted back in 2016, so even the survey data is not the most up-to-date.

We can get more up-to-date data if we only have a look at the age statistics of Bumble in the United States. According to this Statista statistics, 13% of all adults in the US from age 18 to 29 have used or are using Bumble at the time of the survey. This ratio is 10% among 30-44 years and 4% among 45%-64 years old people.

This statistics shows online dating is becoming more prevalent in the older generations as well, as Bumble, the dating app that is mostly used by the younger generation, also has a lot of older users.

As these dating apps work the best if you live in or next to a big city or in a metropolitan area it is a little bit surprising that based on a 2020 survey only 6% live in urban areas, 11% in suburban areas and 7% in the rural area from those Americans who use Bumble

This geographic distribution is more conceivable if we add that the majority of the Bumble users tend to be well of and be well-educated, as these demographic cohorts usually live in the suburbs next to big cities.

And Bumble users are really well-educated, more than 91 percent of users over the age of 22 have at least a bachelor degree.

And the level of education usually correlates positively with income levels it is not a surprise that Bumble users tend to make good money as 13% os all American adults that use Bumble make more than a 100 thousand USD per year and only 7% make less than 50 thousand USD. 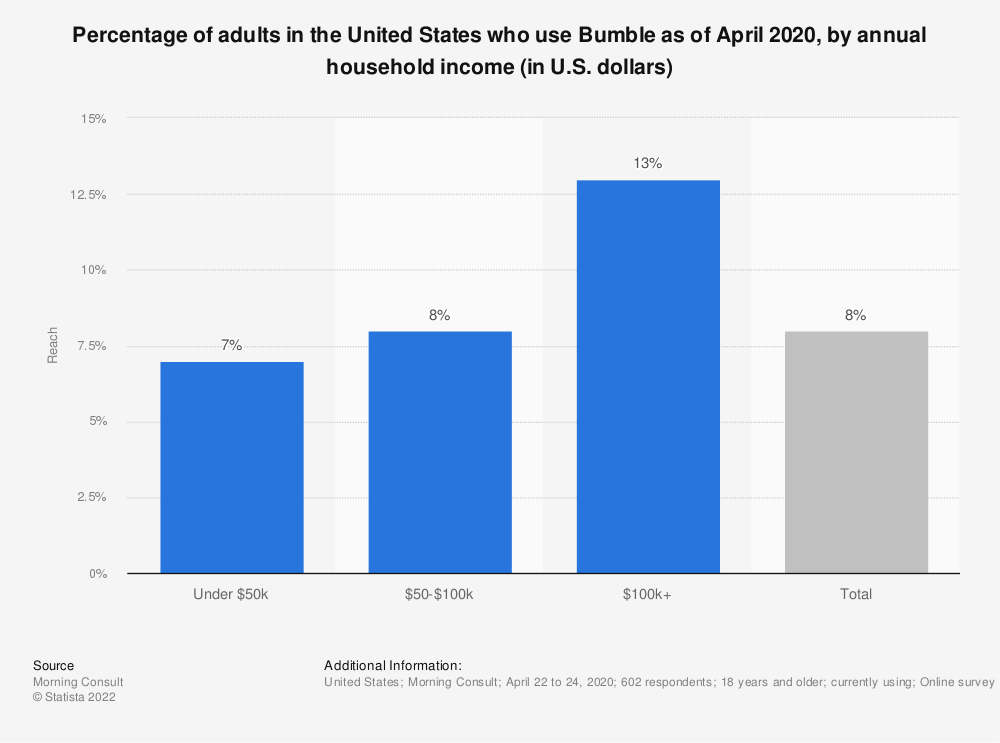 Based on a data study from 2017 the average user spends 100 minutes a day on the app. Until 2017 more than 750 million matches were facilitated by Bumble and it was estimated to be responsible for 5,000 weddings and engagements.

Bumble as the feminist Tinder has an abuse report rate of 0.008 percent, which is allegedly one of the lowest in the online dating industry.

Again, as Bumble is not a public company yet, they are not required to report exact revenue stats, but it is estimated that Bumble has made around 300 million USD in 2019  which means that in one year the company managed to double its revenue.

The majority of Bumble’s revenue is coming from its premium subscription package Bumble Boost. Unlike Tinder, they don’t run any advertisements on their platform.

Bumble is owned by MagicLab, a company that also owns another popular dating app, Badoo and was founded by Andrey Andreev

At the end of 2019, Andrey Andreev sold its entire stake of MagicLab which valued Bumble and the wider business to around 3 billion USD.